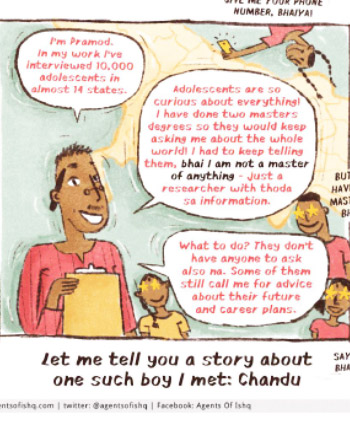 The first digital narrative from Stories of A Survey tells Chandu’s story, as told by researcher Pramod. Why were the adolescents surveyed in UDAYA sometimes so curious and excited to meet the researchers? Could it have something to do with lack of information in their life especially about the great hush hush topic of sex? Chandu’s story is about young people’s curious questions and their inability to find places where they can get answers. A lot of young people are married at a young age without their consent and any family life education. According to the UDAYA study, only 9.7% of boys in UP in wave 1 had received any family life education which later increased to only 16% in Wave 2. Thus, the comic navigates the journey of Chandu, who gets the chance to learn about contraceptives and sexual reproductive health through one of the Udaya researchers.