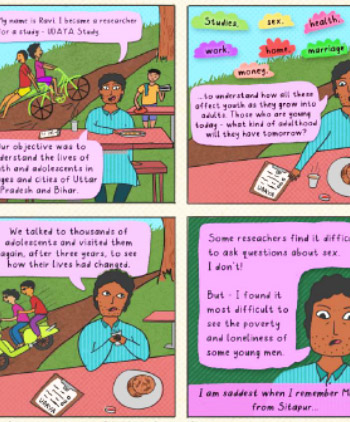 The second digital narrative from Stories of A Survey is about Mohan, as told by researcher – Ravi. What makes a 11-year old who loves studying drop out before his adulthood has even begun? Mohan’s story of dropping out of school because of his circumstances and working in an unorganised sector speaks about the life of many adolescents who had to discontinue their schooling because of economic reasons. The comic, along with the findings of UDAYA, captures the encounter of young people with depression, loneliness, and anxiety during their adolescence period as well as their economic realities, while touching on the vulnerability of researchers as they encounter these difficult realities.