Read more about Point Of View

Mera Pehla Mobile (my first mobile) is a Hindi comic book that follows the story of a 15-year-old adolescent girl who becomes a digital technology user through her first mobile phone. Published both digitally as well in print, this comic book is produced by Point Of View (POV), using data insights from UDAYA data on digital media access, use and consumption by adolescents, particularly in Uttar Pradesh.

The comic uses UDAYA data on adolescent realities in Uttar Pradesh, especially around access, use and consumption of media and technology. A deep dive into the UDAYA study helped the team at POV study and identify relevant data points around adolescent girls’ access to mobile phones, the digital gender divide, gender norms, experiences of harassment, parental engagement, etc. The primary findings that helped shape the characters, scenes and dialogues are around the gender differential treatment in terms of access to phones and internet, the gender divide in ownership of mobile phones, the difference between digital media access levels of married and unmarried girls, phone and internet-based harassment and abuse. Some of the data also directly features as trivia in the comic in an engaging and consumable format.

The UDAYA data is combined with lived experiences and first person narratives of 16 adolescent girls and young women shared in two co-creation workshops conducted in collaboration with POV’s grassroots partners, Sadbhavana Trust (Lucknow) and SAKAR (Bareilly). Both organisations work extensively with girls and young women. Co-facilitated by the scriptwriter and the illustrator of the comic, these workshops created a safe space for the adolescent girls and young women to share their experiences, ideas and aspirations around their mobile phones. This workshop helped develop the story, script, illustrations, characters, scenes and dialogues. The primary experiences that emerged from the workshop included stories of how the girls got their first mobile, experiences, barriers and gender norms impacting mobile phone access and use, digital privacy and security, online friendships and aspirations related to mobile phones.

The format of the comic has been designed to be engaging, fun, and conversational, with special focus on maintaining visual aspects that can connect with the audience. The protagonist of Mera Pehla Mobile is young and recognisable, and scenarios portrayed are familiar as well and relatable to girls’ lived experiences surrounding their mobile phones.

An online ‘soft’ launch event was held in August 2021. The participants included over 50 adolescent girls and young women, several of whom were part of the co-creation workshops as well. Following the event, a digital copy of the comic was shared with the participants via WhatsApp. Their feedback and review of the comic as well as the UDAYA data was collected prior to a public launch and dissemination of print versions of the comic book. About 3000 copies of the comic book were printed and shared among adolescent girls and young women. Copies of the book were also shared via different partner organisations like Sadbhavana Trust (Lucknow), SAKAR (Bareilly), Sanatkada Film Studio (Lucknow), Vanangana (Banda), Astitwa (Uttarakhand), Rubi Social Welfare Society (Nagpur), UNICEF (Delhi, Lucknow, Kolkata and Chattisgarh), YUVA (Jharkhand), Adarsh Seva Sanstha (Jamshedpur), and TARSHI (Delhi). The digital comic book was also launched on the POV website through a week-long social media campaign that culminated on the International Day of the Girl, October 11, 2021. The social media campaign was done across multiple platforms like Facebook, Twitter and Instagram, and featured glimpses from the comic along with learnings and data from the UDAYA Study.

The comic book has been well received, and has sparked important conversations on gender norms and girls’ freedom to access and use phones. Adolescent girls and young women who viewed the comic found the character to be relatable to their own experiences and reflected on gender norms surrounding mobile phone access. They especially enjoyed the part of the story where Chanchal tackles digital harassment, leading to reflections on privacy and security issues of using mobile phones. The data, in particular, was considered affirming of lived experiences by many of the girls. They also found additional information in the data useful, and are keen to explore more data insights on gender norms around access and use of mobile phones.

Mera Pehla Mobile was created primarily for adolescent girls and young women between the ages of 14 and 19. Further, the comic book seeks to reach audiences beyond, and start much-needed inter-generational and intra-community dialogue on issues such as gender norms, privacy, safety and consent, particularly in relation to access to digital media and information.

The publication is also attentive to the realities of technology use in semi-urban and rural India – keeping in mind lateral surveillance, shared phones, patriarchal gender norms, and so on. For example, the phenomenon of prank calls or missed calls, or the leakage of girls’ phone numbers that is so prevalent – this publication speaks to the realities of these dangers, and sparks conversations on the tools and strategies that girls can use to keep themselves safe in the digital space.

The comic is a useful resource and a starting point for conversations on digital privacy and security and the digital gender divide, which can be used by stakeholders and organisations engaged in work on gender and technology with adolescent girls and young women. 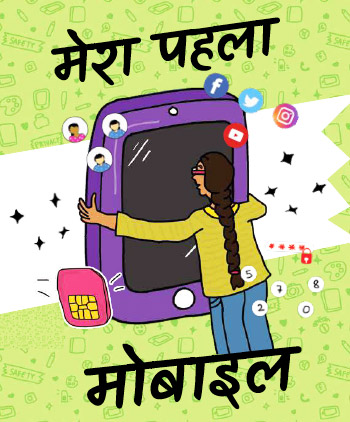